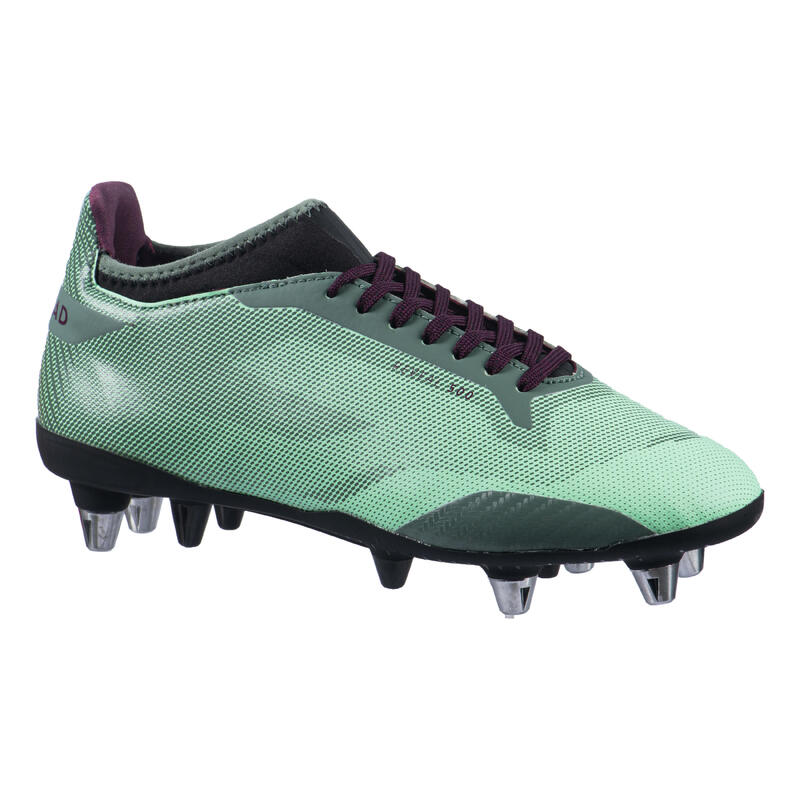 Our team of enthusiasts has designed these boots especially for female rugby players.

Do you play rugby two to three times a week on fairly soft ground? Then here is the Reveal 500, a versatile boot that offers agility, speed, support and durability.

These reinforced boots with liner provide proper support for your feet.

A rigid sole and uppers reinforced in sensitive parts of the foot.

The story behind the Reveal 500 began three years ago. It all started with the desire to offer expert players a high-quality boot that was comfortable and hard-wearing and which responded to the demands of playing at their level. Our design team joined forces with our rugby-playing ambassadors to make the boot a reality. After creating more than ten prototypes, we are delighted to bring you this versatile boot.

It's a boot designed with the pros.

We designed this boot in collaboration with rugby-playing colleagues and also with players from LMRCV, who play in France's Elite 1 competition. These players know what they want from a boot. The Reveal 500 passed the user tests we set up with expert female players competing at both regional level and the highest level in the country.

Our team is proud to present…

We are proud to bring you this boot, which has won over professional players such as Blagnac and France centre Gabrielle Vernier. “Gabrielle has tested and approved the Reveal 500. That's when we realised we weren't far from achieving what we set out to do," said Elodie, a product manager at Offload.

… this versatile boot, one that stands apart from the rest.

You can see just from looking at it that this is a versatile boot. The front part is supple and soft, aiding your agility and speed. It fits snugly and is reinforced in sensitive parts of the foot. The rear section is hard-wearing. It has been reinforced to protect you and offer support, meaning you can ruck with complete confidence. The liner adds to the feeling of support, while the rigid sole is all natural curves.

The new hybrid sole has been developed for play on all types of pitches. We have fitted the sole with 13 mm studs at the front and 15 mm studs at the rear. They're ideal for soft pitches, though you can easily replace them with shorter studs for quite soft pitches and moulded studs for dry pitches.

You can adapt your level of traction and to the condition of the pitch by using Offload aluminium 11-13-15-18-21mm screw-in studs sold by Decathlon.
13mm rubber screw-in studs reference 8035462 are not compatible with this boot model.