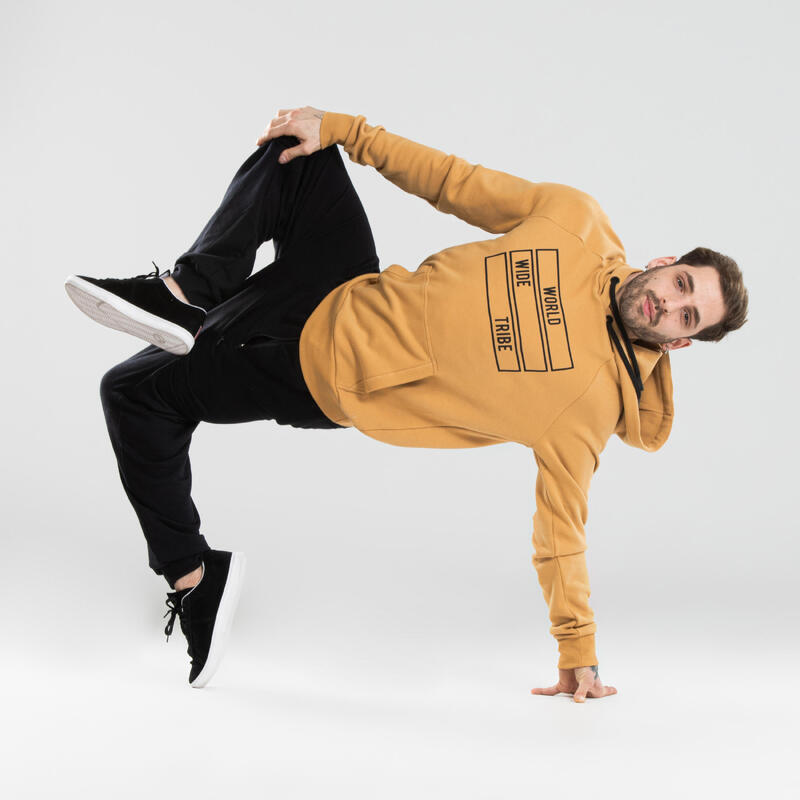 Our team of passionate designers created this sweatshirt for urban dancers of all levels looking for a technical yet trendy look.

Need a comfy, breathable sweatshirt? This sweatshirt, designed with input from professional dancers, is made from stretchy, ventilated fabric for freedom of movement to let you express yourself.

Elastane plus a loose cut for greater freedom of movement

Made from a lightweight and comfortable cotton/lyocell blend.

Can you be comfortable when dancing in a sweatshirt?

When doing urban dance, you need the right outfit for your moves. Wearing a sweatshirt can be difficult because you can get hot. But this sweatshirt is made from breathable fabric that continually evacuates heat so you won't overheat. The cut of this sweatshirt lets you move freely while keeping you covered.

Why wear a hooded sweatshirt?

Hooded sweatshirts, AKA hoodies, appeared in the 1930s in the United States. At the time, they were worn only by athletes. With the emergence of hip-hop, sweatshirts became an iconic item for dancers who wanted to be able to move easily and express themselves, such as in the film "Beat Street" where every dance crew had their own hoodie.

Do not tumble dry

The carbon footprint of this product is:
29.98 kg CO2e
1 kg of CO2e represents 5km in a petrol car (according to the Base Carbone© of ADEME)
What's the carbon footprint ? We evaluate the environmental impact of all our products. At all stages of their life cycle: from the extraction of the raw material, passing through transport to the plant which transforms them, the transformation, the manufacture, the transport of the finished product, until its use and end of life. Find out more
The environmental note of this product is: D
What is the environmental note? Overall environmental score for this product in comparison to others in the same category. It is calculated based on its impact on the environment (air and water emissions, greenhouse gas emissions, depletion of natural resources) at each stage of its life cycle, according to a system managed by ADEME. Find out more