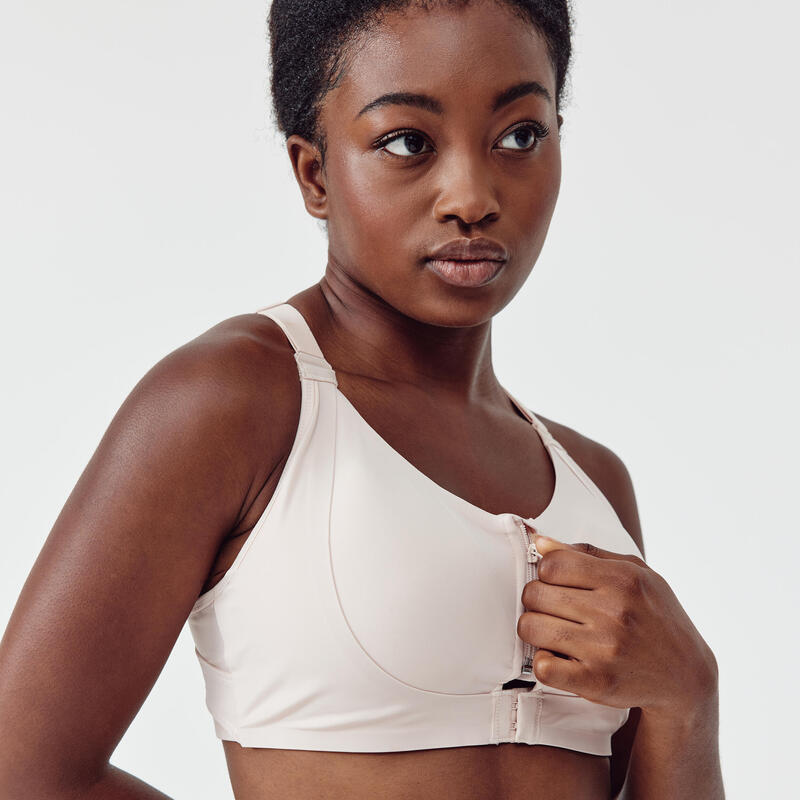 This bra is made for women who seek optimal comfort during sports activities, and its design offers an unrivalled level of support.

This bra is a real feat of technical prowess: you'll feel reassured, as though you're in a cocoon. There is a version with a prosthesis pocket, with reference 965363.

The Jog Kokoon bra reduces impacts to the chest by 35% .

Zip closure, easy adjustment of straps on the front.

Fabric is exceptionally soft on the skin.

HOW MUCH SUPPORT FOR MY CHEST?

It offers a superior level of support: It's made for all kinds of sports practices, particularly running, which generates the greatest level of chest impact.
It's been tested in our labs using sensors that measure chest acceleration during movement (walking, running, jumping).
* This bra reduces impacts to the chest by 35% (compared to city bras and during activities that generate strong impact forces).

A STORY OF DESIGN?

The design of the Jog Kokoon bra was a real adventure for us, and it started with the development of a bra specifically for women suffering from breast cancer: It's a story of co-design with patients and the medical staff of the Oscar Lambret Centre.. We made such technical progress to make a bra that entirely respects the body, that we ended simply asking ourselves: Why don't we offer this to everybody?
So here's the version that doesn't feature a prosthesis pocket.

WHERE TO FIND THE VERSION OF THE BRA WITH BREAST PROSTHESIS POCKET?

The version with a pocket for inserting a breast prosthesis is the Jog Kokoon Plus: you'll find it on decathlon.fr under reference no. 965363.

Not suitable for prostheses (no pocket).
see JogKokoonPlus

Do not tumble dry

The carbon footprint of this product is:
3.99 kg CO2e
1 kg of CO2e represents 5km in a petrol car (according to the Base Carbone© of ADEME)
What's the carbon footprint ? We evaluate the environmental impact of all our products. At all stages of their life cycle: from the extraction of the raw material, passing through transport to the plant which transforms them, the transformation, the manufacture, the transport of the finished product, until its use and end of life. Find out more
The environmental note of this product is: C
What is the environmental note? Overall environmental score for this product in comparison to others in the same category. It is calculated based on its impact on the environment (air and water emissions, greenhouse gas emissions, depletion of natural resources) at each stage of its life cycle, according to a system managed by ADEME. Find out more