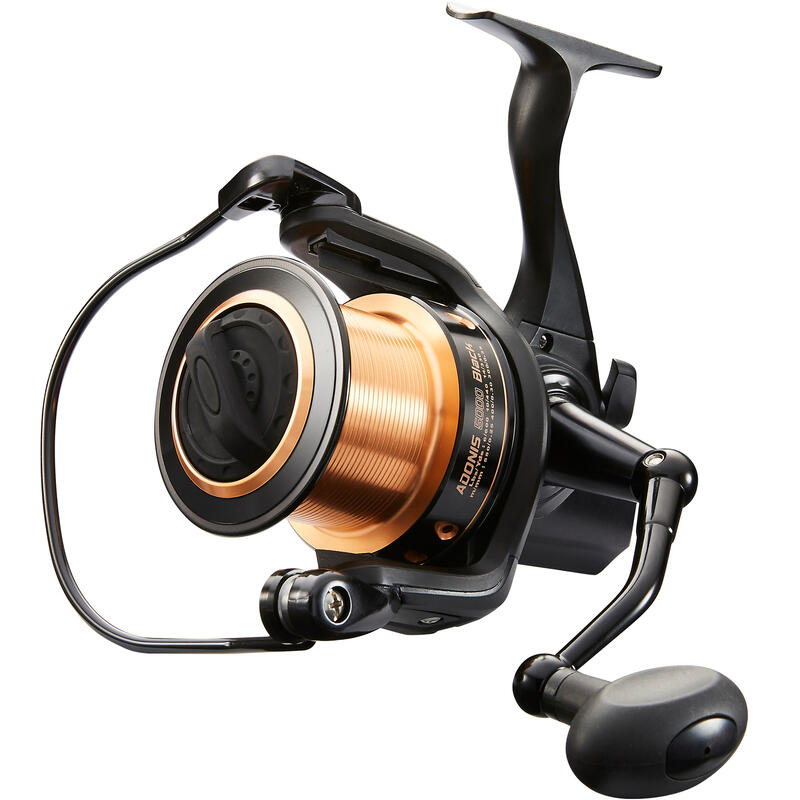 Our engineers developed this reel for carp anglers who want a durable versatile reel that can also be cast long distance.

Thanks to its graphite frame and aluminium spool, the Adonis 5000 reel is able to withstand the most extreme conditions during your carp fishing trips.

The slow wobble enables perfect winding of line around the spool.

What is the line retrieve per crank and ratio?

The reel's crank winder (TMV) is the average length in centimetres of line per crank turn.

The Adonis 5000 has 97 cm of TMV to reel in faster if you are fishing at long distance and it is less tiring. For example, if you are fishing at 100 m, it will take 103 turns of crank, thus, 30 turns less than a reel with a TMV of 79 cm!
A reel ratio corresponds to the number of times the spool turns when you turn the crank.

When reeling in a carp, the latter exerts a force of tension on the reel. The reel must be able to resist while remaining reliable. Drag power is referred to in kg.

The Adonis 5000 has 5.5 kg of power, by tightening the wheel to its maximum. This is largely sufficient to reel in the largest specimens.

For example, during a tough battle during which you have to drag the fish hard, the necessary resistance rarely exceeds 2.5 kg.

What does the ratio mean?

A reel ratio corresponds to the number of times the spool turns when you turn the crank. Example: For a ratio of 5.8: 1, the spool spins 5.8 times per crank

1. The removable metal crank is ambidextrous to adapt to both right-handed and left-handed anglers. The crank is screwed on and collapsible to save space in the sheath.

2. Two plastic spool squeegee joints prevent the line from going under the spool.
3. Line clip mounted on a spring, adapts to the diameter of the line to avoid damaging it.

Our reels are tested in the laboratory using a machine that reproduces the number of revolutions that a reel undergoes during its use. This allows verifying the strength of the mechanism and its fluidity. These tests are confirmed by our teams under fishing conditions.